An article pulled from the Spring Grove Herald recalls Harold “Link” Ellingson’s experiences in the 8th Air Force. Harold was the uncle of one of our parents.

The flag that our Legion Post 249 is flying this month is the flag of Staff Sgt. Harold “Link” Ellingson of Spring Grove who served in the U.S. 8th Air Force stationed in England in World War II.

He flew 50 missions over France and Germany. One of his harrowing experiences during a mission was belly landing his bullet riddled B-24 Liberator bomber because the pilot had been killed and the co-pilot was badly wounded.

Link was not a pilot; he served as the flight engineer and gunner, but managed to get the plane down safely. On another mission, their fuel lines were severed by flack, so they had to ditch the plane in the English Channel and were picked up by an English boat.

A picture that Link is in of a heavy bomber crew is in the centerfold of the March 27, 1944 issue of Life Magazine, as their group was part of the first American daylight attack on Berlin. We proudly fly his flag for the month of December.

Harold survived the war and had 4 children! He was a Mobile gas hauler. 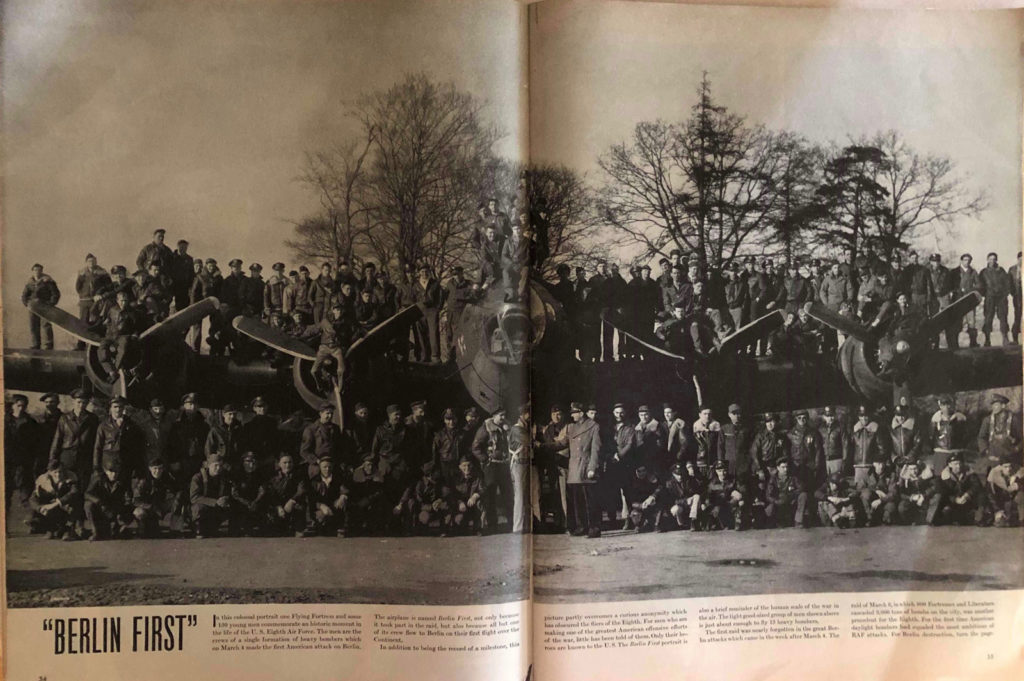 More on the B-17 pictured in the article of Life Magazine.

The airplane was shot down by a fighter near Quakenbrück with motors #3 & #4 damaged, motor #2 in fire, crew bailed. Crash Location near Barnsdorf.

This story comes out on Veteran’s Day. We want to thank all those brave men and women who have served our great country over all the decades. You are true heroes!   Mae Gieseke leaned her full weight against the…
END_OF_DOCUMENT_TOKEN_TO_BE_REPLACED

Written by Chuck Cravens, AirCorps Aviation and revised by Emily Enger. One of the lesser known and under-appreciated contributions to the Second World War came from women pilots. 1,102 women served in either, or both, the Women’s Auxiliary Ferrying Squadron…
END_OF_DOCUMENT_TOKEN_TO_BE_REPLACED

The plane shuddered like it had hypothermia. WASP trainee, Muriel Lindstrom, could feel the vibrations over her entire body; even her teeth hurt. She kept her hand light on the stick as she continued her ascent. With its 450 HP…
END_OF_DOCUMENT_TOKEN_TO_BE_REPLACED

This story was submitted by 2nd cousin of S/Sgt. Robert H. Fisher Jr., who was a crewman on a B-24 Liberator with the 8th Air Force, 93rd Bomb Group. He and his crew were last seen over the North Sea…
END_OF_DOCUMENT_TOKEN_TO_BE_REPLACED