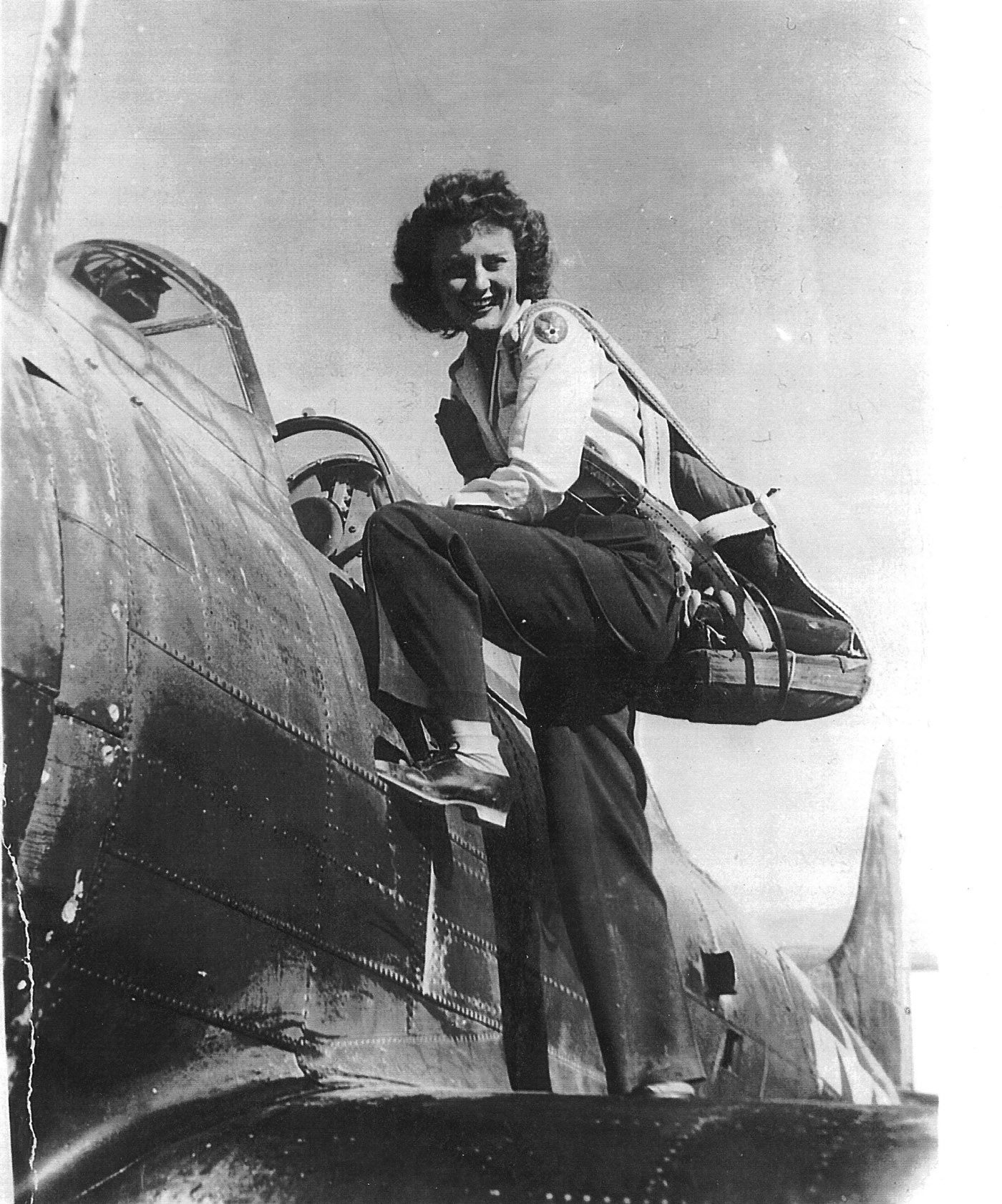 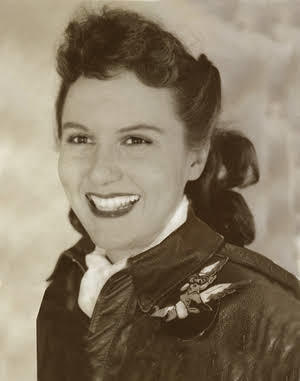 The plane shuddered like it had hypothermia. WASP trainee, Muriel Lindstrom, could feel the vibrations over her entire body; even her teeth hurt. She kept her hand light on the stick as she continued her ascent. With its 450 HP radial engine, the Vultee Valiant BT-13 was faster and heavier than her Primary training planes. It was easy to make the mistake of manhandling it, trying to match power with power. But that’s not how a plane performs best. It takes a gentle hand, one with deftness and finesse, to become a proficient military pilot.

Mimi loved flying. She clearly remembered her first flight, at age 6 in a Curtiss Jenny bi-plane. There’s nothing like that first time – the wind screaming through her hair in an open cockpit. There was no going back. 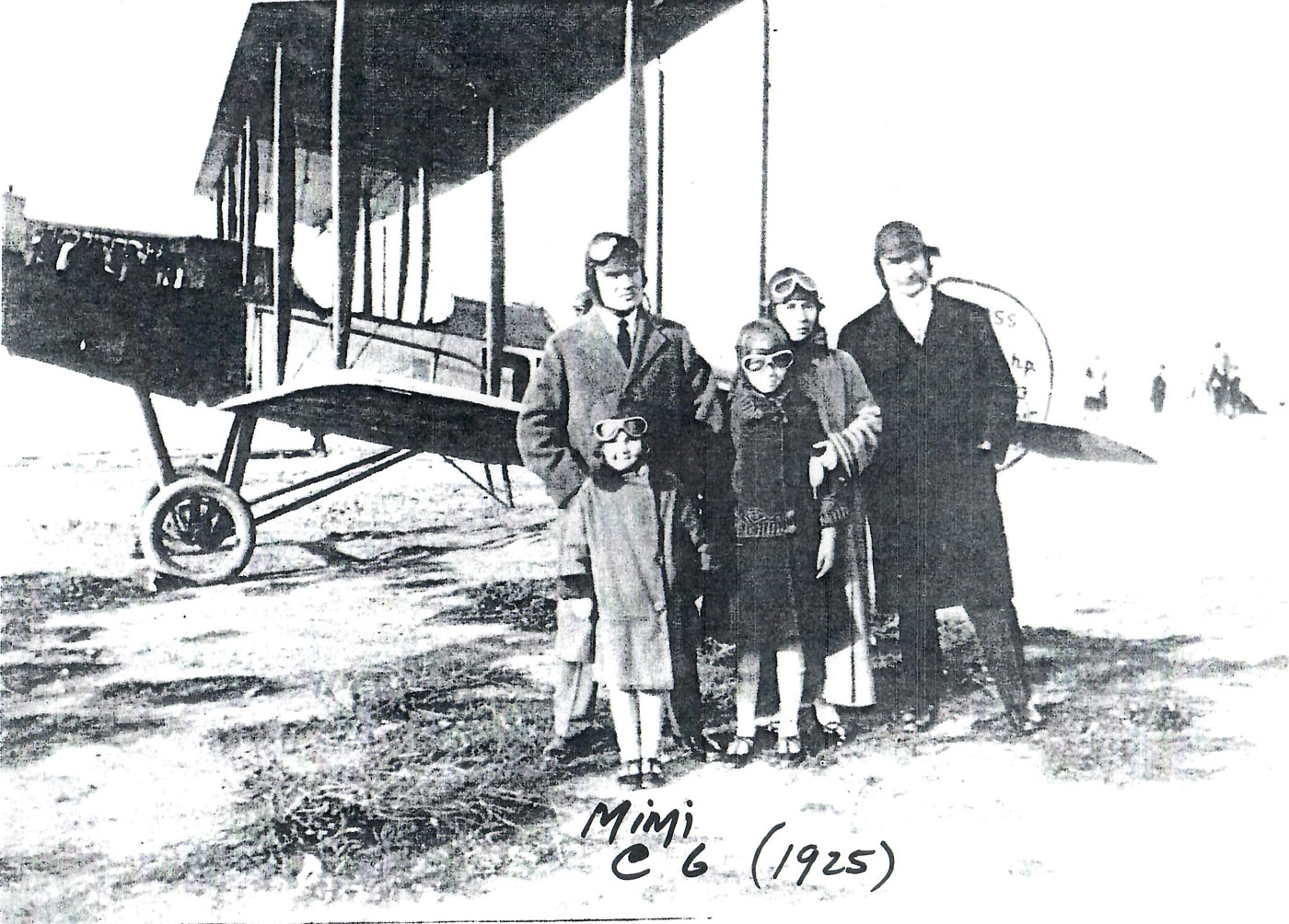 The West Texas sky was beautiful and cloudless.  It was “severe clear,” as if the weather were custom-made to make this day go well. Mimi wasn’t nervous, exactly. She’d had her civilian private pilot’s license for three years already and knew how to fly as well as she knew how to ride a bicycle. But she’d be lying if she didn’t admit there was some added pressure. 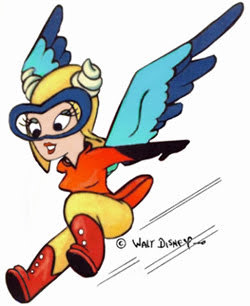 Today was her first solo flight in the second phase of training. She’d been at Avenger Field for several months completing ground school and Primary flight training. But flying “The Army Way” was much different than flying as a civilian. The WASP trainees were held to the same standard as male cadets…and then some. Typically, one of every two women washed out of the program and were sent home–at their own expense.

Mimi earned her pilot’s license as an elective in college. Turned out to be a good investment, when just a few years later, the Army Air Forces put out the call for female pilots to assist in the war effort as part of the newly-formed Women Airforce Service Pilots (WASP) program. Famed aviatrix, Jacqueline Cochran, had convinced President Roosevelt and AAF Commanding General, Hap Arnold, that her female recruits could release male pilots for combat service in two theaters of war. She chose barren, wind-swept Avenger Field in Sweetwater, Texas as the training facility.

Finally, she ran through her engine-out emergency landing procedure. As she throttled back the engine, the sky became peaceful and quiet. Mimi first adjusted her prop, then trimmed the aircraft for a gentle glide slope. Next she checked her available fuel, ensuring that the valve was selecting the best tank. Finally, she adjusted the carburetor mix to full rich. Executing a series of gliding turns, she descended. Once she reached her desired altitude, she leveled the plane and opened the throttle. The engine coughed a couple times, just enough to make her pause, then roared back to life.

Everything was going so smoothly, she almost didn’t believe it. But she was due a beautiful day. Military training was not an easy thing, especially as a 24 year old woman. It’s not that Mimi wasn’t used to a man’s world – out of 50 people, she had been the only female in her Civilian Pilot Training Program class. But it was different in the military. Here, the expectations were high, the rules were strict, and privacy was nearly unheard of.

Each month, she was required to report her menses cycle for a medical research study examining women’s physiological and psychological impact on flying. Her cycle was then compared against her regular flight evaluations. Telling the physician about her period was close to the most embarrassing thing Mimi had ever done, trailing only her unbelievable first introduction to the WASP program, when she went to the Santa Ana Air Base to get her flight physical.

Surrounded by hundreds of cadets, Mimi was paraded multiple times through hordes of howling men starved for any sight of a female, escorted to the front of each line to avoid a scene breaking out. All of the physicians were also male, and she was forced to undergo her examination by an uncomfortably handsome doctor whose every touch caused her to jump out of her skin. She was so nervous, the doctor couldn’t get an accurate read on her blood pressure; finally, the kind man stopped trying and visited with her for awhile until her nerves calmed down. After a full day of being shuffled to specialists, everyone from psychologists to eye doctors, her report came back with the heart rate test inconclusive. She was sent back to the handsome doctor; this time, he made her read a magazine for half an hour to fully calm down. It was such a bizarre experience, Mimi could only look back with a sense of humor at it all. She wrote about it in detail in the first letter she sent her parents, hoping that the situation would make them laugh in the midst of their concern.

All of these new experiences made a young woman feel very out of her depth, but the chance to fly regularly was worth it. Up in the sky, on a bright day like today, every part of her that was nervous shrank like the tree tops after liftoff and her pure love of flying took over. She spent an hour soaring through the air, running through all her assigned drills. Then, regrettably, it was time to land.

As she approached her destination, Mimi keyed her mic and spoke to the air traffic controller stationed in the Avenger Field tower. “This is Vultee One Five Zero. Have the airport in sight, requesting permission to land runway 35, full stop.”

The controller’s response crackled through her headset: “That’s affirmative, One Five Zero. Wind 270, at 18…you’re number two behind the AT-6 on downwind leg.”

Following the aircraft in front of her, she went through the final checklist for landing, fondly known as GUMP: Gas-check. Undercarriage-wheels down and locked. Mixture-full rich. Prop–full forward. Mimi was feeling mighty confident as she turned on her downwind leg to Avenger, when she heard a sound that made her heart fall faster than the descending aircraft. The engine quit.

Instead of the thundering roar, Mimi now heard only the whistle of the wind. A typical West Texas cross-wind, blowing hard from her left.  She tried re-starting the engine, heard it cough but it wouldn’t fire. Meanwhile, the plane continued to glide downward, far too low for her to bail out.

She took a deep breath to calm her nerves, reminding herself she’d practiced a deadstick landing only an hour before. Of course, that was at altitude, with no crosswind, and the engine still running! Time to call in a Mayday to the tower and prepare for an emergency landing.

Mimi remembered not to clench her fist around the stick, keeping a light hand even as every instinct wanted to cling tightly to whatever she could. She feathered the prop, trimmed the aircraft and gently turned from base to final approach. There would be no go around.

At her side was the heavy hand crank that extended the flaps to slow her airspeed. The plane continued to shimmy in the crosswind, forcing her to use rudder and slip the nose sideways.

As she lined up with runway 35, Mimi gently eased the stick back to slow her descent further, all the while acutely aware that too much nose up would result in a stall–and a crash landing. She decided to fly the taildragger on to the runway instead of flaring for a conventional three-point landing.  As she crossed the numbers, she slipped the nose back to parallel and touched down smoothly, feeling the comforting bump, first as the front wheels contacted the tarmac, then as the tailwheel settled to earth. The aircraft slowly rolled to a stop. Mission accomplished.

Mimi exited the plane with a big smile on her face. Her instructor stood at the edge of the runway, clipboard beneath his arm. He was clapping. 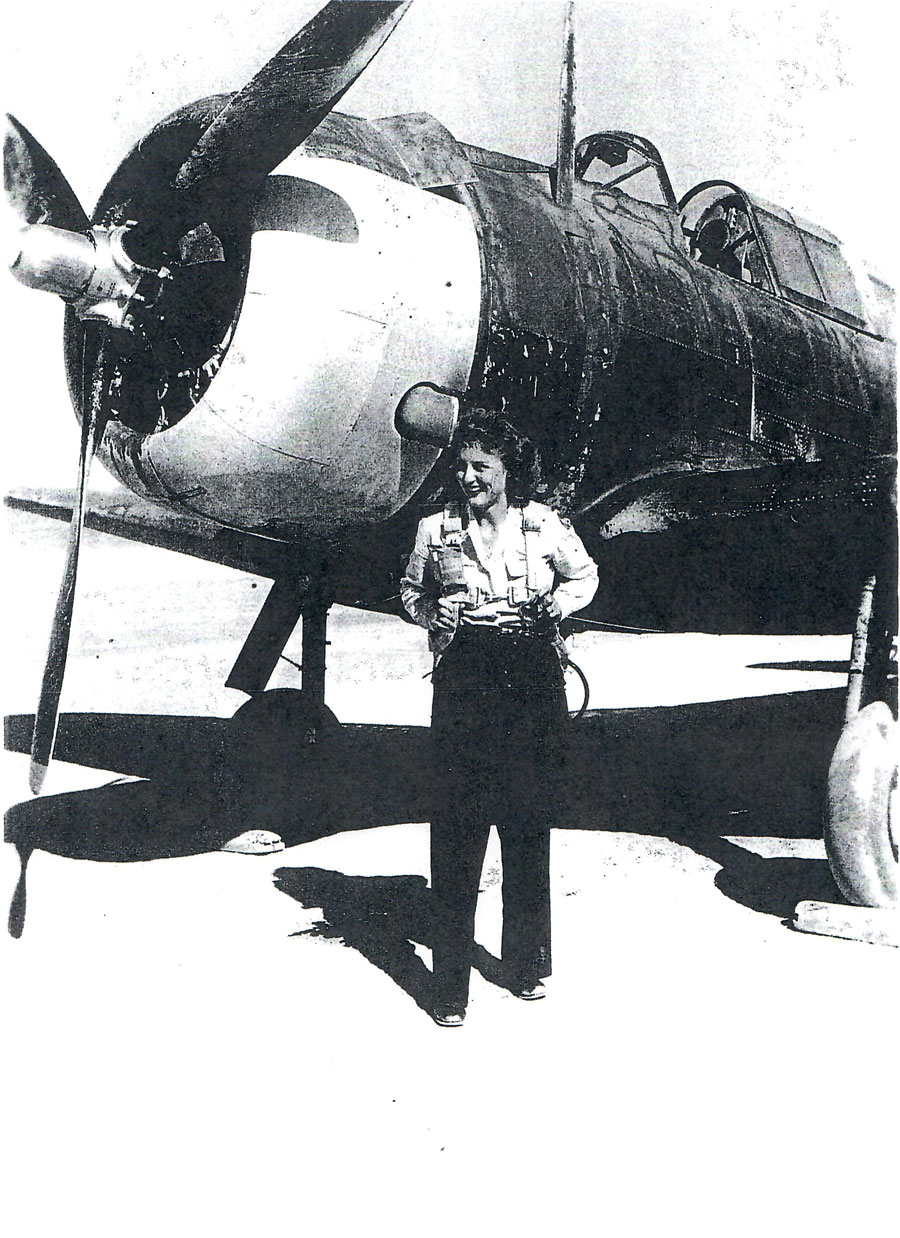 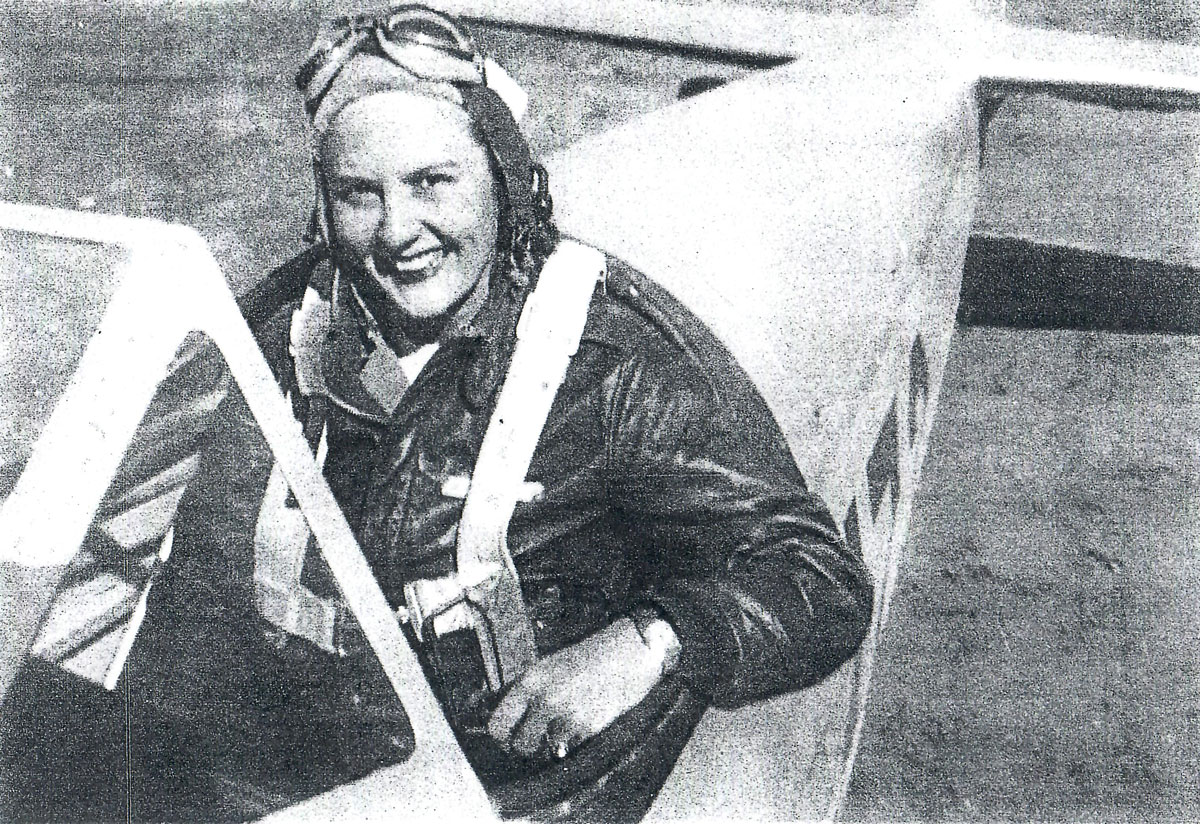 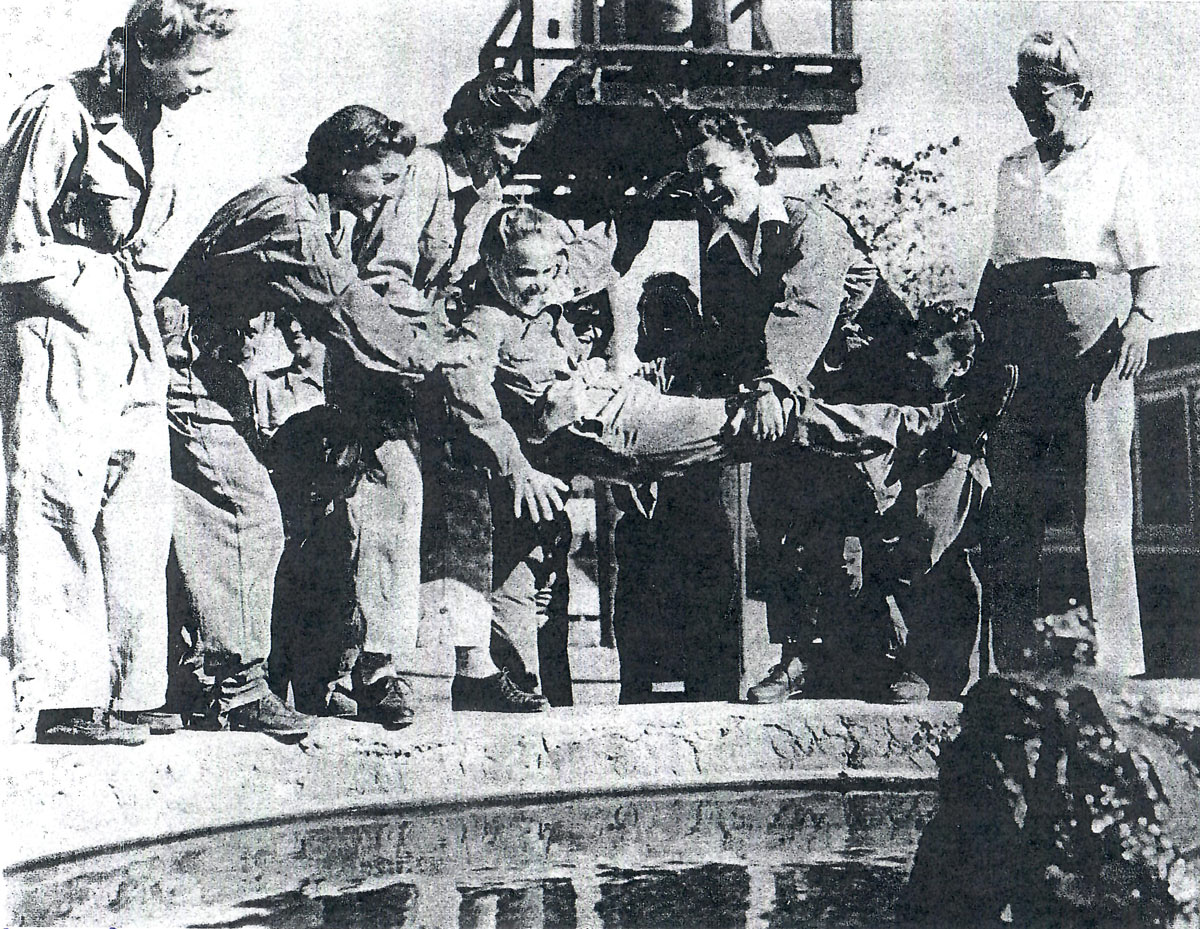 This story comes out on Veteran’s Day. We want to thank all those brave men and women who have served our great country over all the decades. You are true heroes!   Mae Gieseke leaned her full weight against the…
END_OF_DOCUMENT_TOKEN_TO_BE_REPLACED

Written by Chuck Cravens, AirCorps Aviation and revised by Emily Enger. One of the lesser known and under-appreciated contributions to the Second World War came from women pilots. 1,102 women served in either, or both, the Women’s Auxiliary Ferrying Squadron…
END_OF_DOCUMENT_TOKEN_TO_BE_REPLACED

The plane shuddered like it had hypothermia. WASP trainee, Muriel Lindstrom, could feel the vibrations over her entire body; even her teeth hurt. She kept her hand light on the stick as she continued her ascent. With its 450 HP…

This story was submitted by 2nd cousin of S/Sgt. Robert H. Fisher Jr., who was a crewman on a B-24 Liberator with the 8th Air Force, 93rd Bomb Group. He and his crew were last seen over the North Sea…
END_OF_DOCUMENT_TOKEN_TO_BE_REPLACED